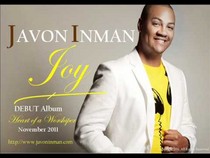 The moment, right before He gently whispers, “Come,” distractions bow, noise stills, and wonder fills the heart, is precisely what keeps worshipers relentlessly plunging into The Amazing’s arms.

Born in Canton, OH, Minister Javon Inman was raised in a God-reverencing home with his parents, brother and sister. At age four, he began singing in the Sunshine Band at his grandfather’s church, New Life C.O.G.I.C, in Massillon, OH. In 1984, his family relocated to the Washington, D.C. Metropolitan area.Early on, Javon’s parents recognized the gift of music that God entrusted in him. His parents made certain that he actively participated in All-State choirs, musical theatre productions, talent competitions, chamber ensembles and Gospel choirs. In 1995, Javon was chosen to sing the National Anthem at the notorious John F. Kennedy Center for the Performing Arts in Washington, D.C.As a teenager, he was a member of an R&B group. The group received recognition throughout the D.C. Metro area singing at various special events and in multiple competitions.  One talent competition in particular at Howard University in Washington, DC, afforded the group to win first place. The prize was to compete at the renowned Apollo Theatre in Harlem, NY –an experience that Javon will treasure for a lifetime. However, a few years later, Javon clearly heard the voice of the Lord, directing him to stop singing secular music and to utilize his gifts for The Kingdom.  Javon answered, “Yes, Lord.”  This was the “end of Javon” and the “beginning of God.”
On Resurrection Sunday, April 12, 1998, Javon rededicated his life to the Lord and has never looked back!  He submerged himself in the Music Ministry at Refreshing Spring C.O.G.I.C. by joining the Young Adult Choir and Praise Team. Refreshing Spring’s Music Ministry would prove to be his training ground to becoming an effective Choir Director and Praise & Worship atmosphere changer!

Until recently, Javon served as the Minister of Music at Hear the Word Bible Church, Bowie, MD (Pastor Thomas E. Cunningham). This position undoubtedly strengthened and further prepared Javon for the next chapter of his life –to write and minister music that draws the hearts of people to worship.
Some notable accomplishments for Javon include, his acceptance to compete as a semi-finalist on the hit talent television show Star Search in 2004. He was also a semi-finalist in the 2007 Gospel Music Association Talent Showcase. He has shared the stage and served as the driving voice behind some of Gospel Music greats. He has ministered in song at countless galas, celebrations, festivals and church functions. One of Javon’s passion’s is songwriting. He joyfully exclaims, “Don’t get me wrong, I love singing, but something extremely incredible happens when a simple melody or 5 lyrics are crafted into beautiful poem set to music –it’s nothing, but God!” As a songwriter, Javon has penned well over 200 songs for artist’s, for churches/choirs, and for himself.

Javon currently lives in Bowie, MD with his wife, his queen, and their two children.

See and Hear More from Javon at http://www.javoninman.com